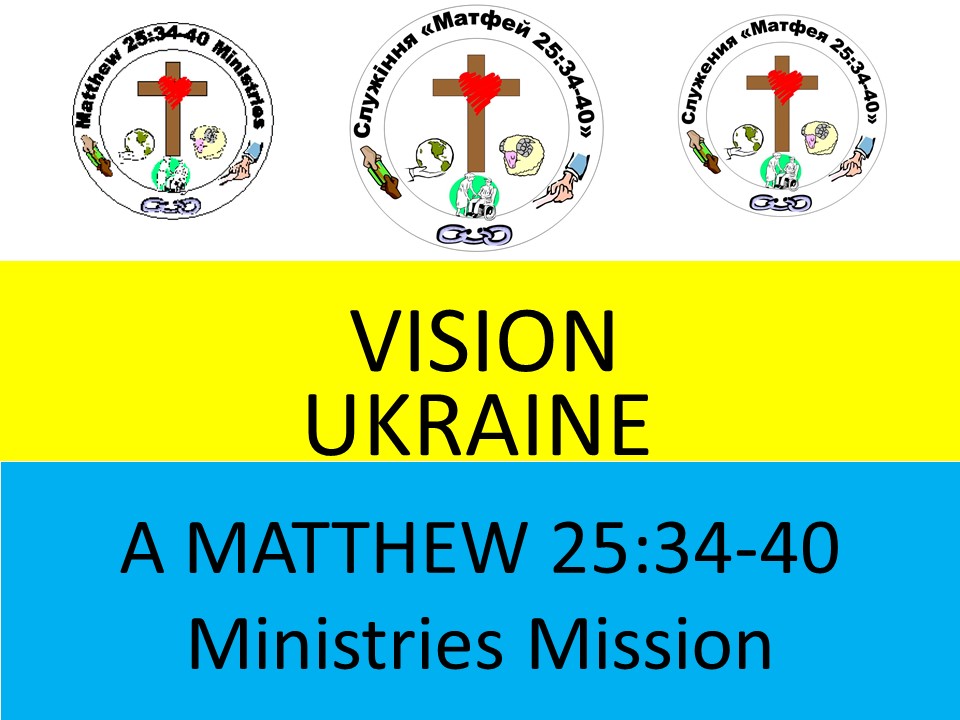 Vision Ukraine is headquartered in Kamianske, Ukraine.(Kamenskoe in Russian; was formerly Dnieprodzerzhinsk, Ukraine. The City was a former closed city under the Soviet Union and the home town of Leonid Brezhnev,a former Premier of the Soviet Union.) The City was an industrial center supporting the Soviet space program and weapons of mass destruction production programs. At one time, the City was a major center of Communism. Its various institutes taught skills which were widely used throughout the Soviet Union.One of the significant schools is the Language Institute, important for training translators as well as foreign language teachers and providing language skills to scientists and scholars engaged with the rest of the world. English was one of the primary languages taught at the Language Institute. In the beginning of Vision Ukraine, students from the Language Institute were drawn to the services so they could hear a native English speaker preach. Some became converted and joined the church. Some of these converts from the late 90's are now leaders of the Mission.

A number of other congregations have been planted by Vision Ukraine throughout Ukraine, Russia, Czech Republic, Slovakia, Italy, and Romania. Leaders trained in the Light of the Gospel have started other congregations, resulting in a network of churches now cooperating with each other in the HQ region. The Church leaders of the City meet weekly to plan mutual projects and to pray together.

The Ukrainian Ministry Association was initially formed in 1998 when the Ukrainian Family Institute asked Pastor Shaw to teach the Most Excellent Way program to a group of 57 representatives from churches seeking to establish alcohol rehabilitation centers. Pastor Shaw spent a week teaching them how operate a center for both drug abuse and alcoholism from the Russian translation of the Most Excellent Way Program Manual, which had been obtained from Perm, Russia. The Ukrainian translators found that some translation improvements were needed, and Vision Ukraine provided the improved MEW Manual (Russian) back to Russia, to the original workshop participants, and the MEW Headquarters in the US. The next year, another workshop was held, attended by 77 churches. In 2003, Vision Ukraine provided 5000 copies of “Serving As Senders (Russian Edition)” (by Neal Pirolo, Emmaus Road International) to a visit of the Doulos, of Operation Mobilization Ships, to Odessa for free distribution. Many of the visiting pastors to the Doulos connected with Vision Ukraine and became part of the Ministry Association. Since 2014, the Ministry Association has led prayers for Ukraine in the public squares in over 200 cities.

Vision Ukraine has been instrumental in translating a large number of the MATTHEW 25:34-40 Ministries resources into Russian plus other items requested to meet issues in Ukraine. In the process, MATTHEW 25:34-40 has formed partnerships with other ministries and helped them to expand into international fields. Some of our partnerships include the following:

Vision Ukraine started a 2-year Bible College in 2000 to develop church planters and leaders. A practicum of the Bible College was to serve in the Soup Kitchens and in each of the ministries of the churches. Kamianske churches now operate a Mission School, Graduates are sent out to start churches in villages where churches have never existed before. (There are thousands of such small villages in Ukraine alone, and very many more throughout Eastern Europe and Asia.) Because the villages are small, the church planters are trained in skills where they can sustain themselves (with their family) without external financial support.

Some of the Vision Ukraine shared resources are available on this website under the Russian Language resources.

These are various ministers that support this overall mission. Each supporting ministry comes with its own supporting resources and courses.

Discipleship Ministries include those that are teaching others why, what, and how to answer the call of Christ and to live like HE wants us to live.

Matthew 25:34-40 describes a series of activities for which the righteous are rewarded because they have done them.

Community ministries are those services intended to address the needs of an entire community rather than just individuals.

Military veterans often suffer from unique combinations of issues related to experiencing the violence of combat.

Military families face a host of special issues and needs. The Church must address these needs and seek to prevent the most serious consequences.

Organizing Churches and Community Services to Work Together

In many places, We are a minority ministry, but in almost every community we are in, we are leaders in organizing activities and recruiting the Body of Christ to serve the needs of the community.

Support for Life in the Womb

Support for Life in the Womb is a comprehensive ministry supporting women and men in making good decisions to bring their baby to a full-term, healthy birth and growth to be a healthy adult.

The Bible, as God's word to us, is very important to everything we do across all of our other ministries.

Human Trafficking is a scourge in almost every nation of the world. It is a cruel form of slavery. There is Sex Trafficking and Labor Trafficking; both are a cruel evil.

Youth ministries abound and MATTHEW 25:34-40 has multiple forms of discipleship programs for youth of ages from preschool to young adult.

Jail and Prison Ministries seek to minister to the inmates, those who are at-risk, and those seeking to re-enter society plus their families.

Ministering to our military personnel with their many issues and helping military Chaplains with our many resources, especially people.