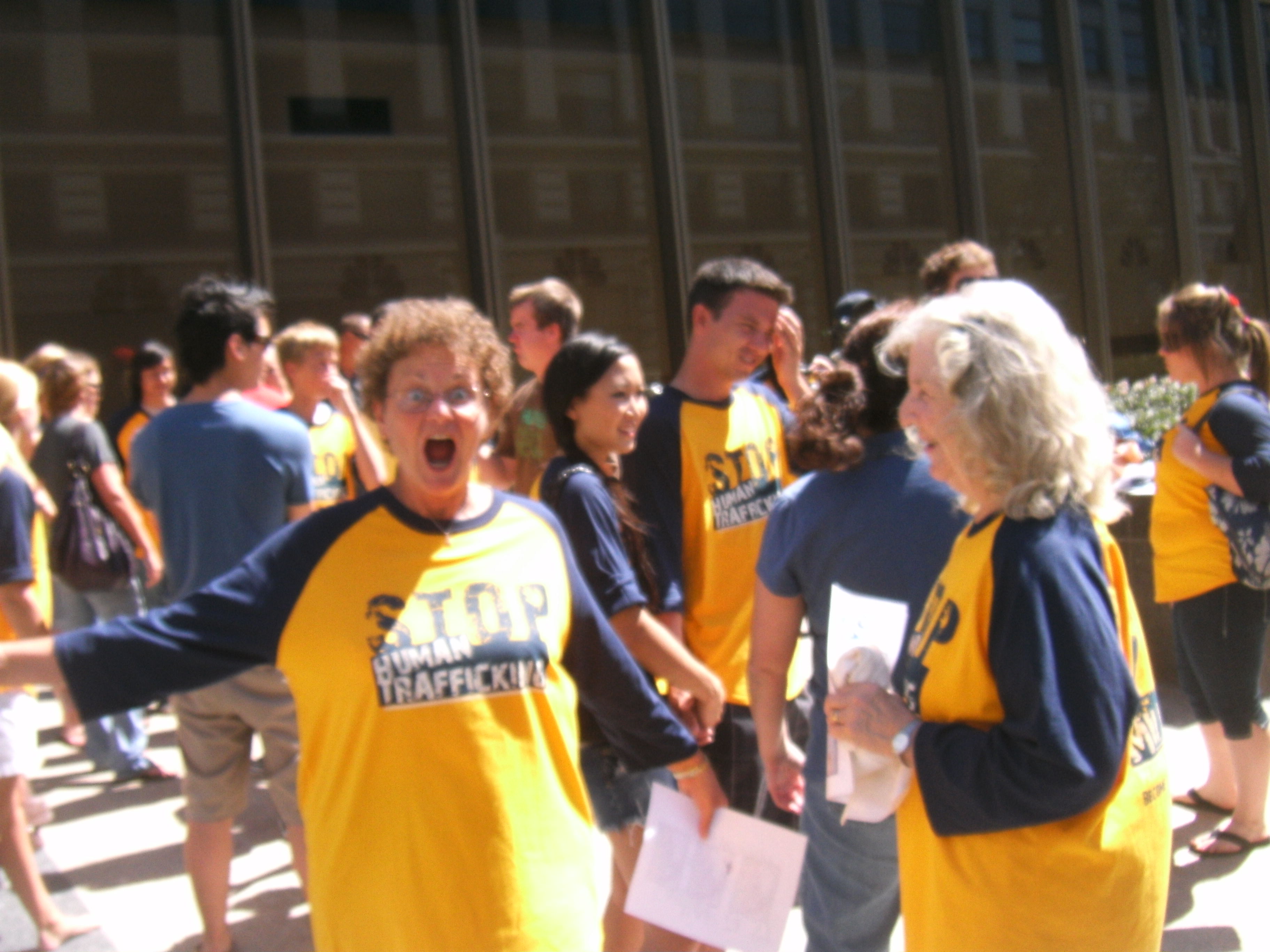 Human Trafficking is a scourge in almost every nation of the world. It is a cruel form of slavery. There is Sex Trafficking and Labor Trafficking; both are a cruel evil.

Prevention and deterrence aspects of the Ministry focus on education. We try to make our education positive, revealing God's plan and purpose for each of us as individuals, how to behave in a loving manner, and how to live in a productive community. Much of this ministry is through partners who have access to children in schools; however, we also have resources used in jails, prisons, juvenile detention centers, and community forums. However, much human trafficking activity is generated through gang activities, so family ministries that intervene in circumstances that contribute to joining gangs are also useful. How we access the families and the susceptible young people varies by community, but our youth ministries are equipped to identify and address these issues. Single parent families seem to be especially susceptible, so our family support ministries play an important role as well. As every pastor knows, reaching the families and their children is challenging and requires direct wisdom from the LORD.

Prevention also needs to interdict poor families with help so that they have no need to sell their children into slavery and also to educate them about the horrible truth of what happens to children who are sold to traffickers. We seek to welcome them into our congregations where the Lord will provide rather than entertain the evil enticements of the traffickers.

In every community, we seek to work with other ministries and authorities to rescue victims of trafficking. In India, our many congregations assist in rescues and accept responsibilities for raising children who are rescued (or supporting children a family doesn't want). One of our partners, James (Varghese) Indian Rescue Mission (see their Facebook page), has a well-established record of both rescuing victims and advocating effectively for the abolishment of trafficking. We belong to Churches Against Trafficking (San Diego), as well as a number of other organizations in different regions. Most or these organizations are focused on rescuing victims and deterring traffickers, so there are many resources to draw on in different localities. On the other hand, we often have difficulties finding partners for preventing trafficking root causes.

Rescue is challenging in many cases for many reasons. However, spiritual and emotional restoration needs to be the ultimate goal. Many traffickers, especially in the sex trade develop strong psychological holds over their victims - so much so that the victims don't view themselves as victims of a great evil but as being helped. Their self-esteem has been warped by (often) years of manipulation. It is necessary for the victims to recognize who they are in the eyes of their Creator and what His purposes are for them. It is also critically important for them to find a home in a healthy family of Christ - The Church. Without a full restoration, sex victims are likely to relapse back into a lifestyle of exploitation.

Sex trafficking starts with recruiting girls (mostly) at ages as early as 8 and grooming them into prostitution, pornography, and sex-slavery. Boys are sometimes groomed into child pornography and homosexual sex by a 'respected' adult male (teacher, coach, or relative). Children identified as loners in school are intentionally befriended by a classmate (a Hook) who is usually a close relative of a gang member, and a steps are taken to make the target dependent on the Hook, usually through material gifts, and the belief that the Hook is a true friend (which is a lie). Often the Hook is a leader of a 'special club' with only a few members. Later on as the child grows up, the child is introduced their trafficker, who manipulates them into a dependency on him (often through drugs). The victims are used until they are used up and aged out (or die from drug abuse or suicide).

Sex trafficking is documented to be closely associated with major sporting events across the world. Sex traffickers often procure rooms at high end hotels catering to attendees to major sporting events and conventions. They have sophisticated social media means for advertising and ordering services. Some 8000 prostitutes provided services to a Super Bowl week. The income to the traffickers was estimated to have exceeded the income to the NFL, inclusive of the broadcast rights. FIFA, NBA, car racing, and Tennis events are also know attract sex traffickers internationally.

Sex trafficking is known to be a problem in at least 190 nations in the world.

Labor Trafficking almost always starts with a series of promises of a bright future. Trafficking is illegal in almost every country and disdained by most religions (Islam being a very notable exception plus many forms of shamanism). Nevertheless, labor trafficking persists.
Across the world, poor people are promised a future of prosperity, often in another land. In some places, poor parents are promised a future income - a benefit of their child's future income - it they will surrender their child to labor for the trafficker. Usually, the trafficker will give the parents a (small) sum of money or forgive a debt they owe with the promise that when the child works off the payment, plus the cost of their room and board, the parent will get regular income from the child's work. There is no known instance of this promise ever being fulfilled. Inevitably, the child is abusively worked, undernourished, cruelly disciplined as a slave, and worked up to 16 hours a day until they are disabled by injury and killed, incur a disease and die, die doing dangerous work, or are killed by a cruel taskmaster. The children seldom reach adulthood.
Illegal immigrants are another broadly exploited group. In this case, a criminal promises to bring people to a land of promised prosperity in exchange for a payment up front. The immigrant are smuggled into the target nation and given points of contact for employment (or merely driven to a warehouse or boarding house). They are provided with fake ID and papers and directed to their work. Their employer (or employment agency) is a criminal organization controlling their pay and daily existence. The victims owe their employer for their boarding and "employment expenses" and perhaps the balance of what they owe for being delivered to the host nation. Usually, they are prevented from reporting the criminal organization to proper authorities by promised retributions on their relatives in their home country (we know where...lives and we will kill them). Some are freed by immigration officials, and except for a few cases are sent back to their home country. Some die. Some are injured, get sick, or otherwise are unable to work and are either rescued by doctors or hospitals or killed by their "employer".
Another form of labor trafficking is a severe form of labor exploitation. People who are poor are most susceptible. In this form, a shady "temporary employment agency" hires low-skilled people for low wages (at or below the legal minimum wage) and assigns them to work for which the agency contracted with legitimate employers. The labor contracts with the agency are legal and appear legitimate according to the representations and submissions made to the company requiring the laborers. However, the agency is representing that they are paying a legitimate wage including benefits under the law when, in fact, they are paying substandard wages. In San Diego, one such agency was paying between two and four dollars per hour while representing a wage starting at $15 dollars per hour. The difference was supposed to be to pay for benefits, which included a monthly bus pass to work ($80 per month actual cost, but administrative agency fees were added). The employees were supporting a contract with a local tourist hotel at $29-35/hour. When discovered, the employment agency operators were prosecuted, found guilty of state and federal crimes, fined, and sent to prison. However, their labor force ended up on welfare because they couldn't find employment and couldn't draw unemployment insurance because the agency had never submitted payments into the state system and no proper employee information submissions were made to the state. The poor employees had never filed taxes (fortunately, they weren't liable for income taxes). It is estimate there are up to 40,000 such employees being exploited in Southern California alone.

Labor trafficking is documented to be a problem in at least 142 nations.

We know that trafficking is evil is the sight of our Lord, as a result of the difficulties in reaching the root causes, we have established anti-trafficking prayer networks in almost every place we work.