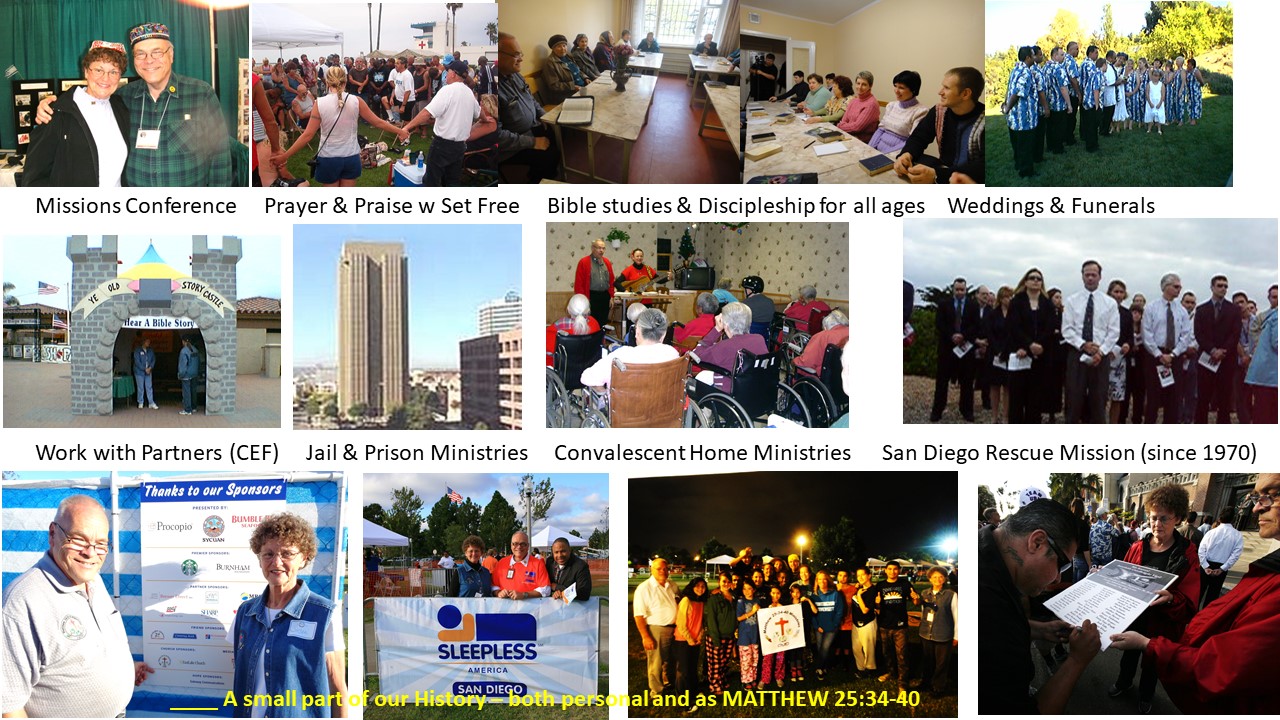 The roots of MATTHEW 25:34-40 Ministries were established in the personal ministries of John and Susan Townsend as they applied their faith to everyday life in their church (Christ Fellowship Church of San Diego) and in their work. By the will of God, tens of thousands of people have joined the work.

John Townsend was a civil service engineer at the Navy lab on Point Loma, San Diego, California. Fellow employees sometimes came to John for counsel. He always provided answers from the Bible, and the advice always seemed to work. He would offer prayers, which were always answered (over time) and eventually, a few coworkers would gather together for a weekly prayer meeting. Over the years, a Bible study was added and by the time John retired from civil service, Church@Work had been born.

John and Susan volunteered for a number of outreach ministries of their church, which involved them in jail and prison ministries, convalescent home ministries, services at the San Diego Rescue Mission, and several prayer ministries. John taught weekly Bible studies in the church, being ordained as a deacon and then as a pastor in 1987. A couple, Dan and Pat Shaw, who the Townsends had met at church felt called to be missionaries to Ukraine, and the Townsends signed up to be part of their communications support team.

The Shaws planted a church in 1994 in Dneprodzerzhinsk Ukraine, which was a former closed secret city making components for the Soviet Union's space program. The Townsends were on their mission support team, providing communications and prayer. They also supported the Shaws when they had to return to the US to update their passports or renew their visas.

In 1997, the Townsends visited Ukraine on a missionary support trip. During their visit, Dan asked how the mission needed to grow and what would be needed to facilitate planting churches in other cities and villages as well as how he should proceed in the discipleship of his congregations. Among the detailed suggestions discussed was the need for support of a missionary in another nation to connect the local congregations into the overall Body of Christ. Dan met a pastor in India (David Wilson) via email, and the congregations in Ukraine agreed to provide a monthly stipend to help him. The churches also agreed to undertake feeding the poor at a local church-sponsored soup kitchen and to establish a Bible College to raise up new leaders. Also, Dan Shaw wanted to promote The Most Excellent Way Christian recovery program; John contacted TMEW (which was headquartered in the greater San Diego region) and delivered a Russian translation of the MEW Ministry Manual to Dan. Some adaptations were needed to improve the translation to be suitable across a wider population of Russian speakers, and the result was teaching the Ministry to 82 churches through the Ukrainian Family Institute in late 1998. Another training session was held in 2000 for another 80+ churches. Dan kept in touch with these churches to help them establish their outreaches to substance abusers. They became the core of the Ministry Association in the years following.

In 1999, there were problems with the Shaws. Pat became sick and had to return to the US for treatment. The original sending church for the Shaws became unable to continue to support the Shaws, so the Townsends decided to provide a spiritual covering for the Ukraine ministry, which was being established as Vision Ukraine. In Ukraine, the newly planted churches were involved in serving at local orphanages and providing needed essentials for the orphans which were not being provided by the government of Ukraine nor the Russian Orthodox Church, which was overseeing all religious activities at government facilities. In order to facilitate raising funds and continuing missionary support, the Townsends established MATTHEW 25:34-40 Ministries, rolling all of the services they had been doing personally under this covering. They applied for 501(c)(3) status as a recognized church, which was granted later that year.

The Townsends had served in leadership of San Diego County Jail Ministries since 1977, serving on the Scheduling Committee, then various other positions, eventually rising to President and Secretary of SDCJM by 1997. Over the years, many of the founding purposes of SDCJM were taken over by the SD County Sheriff's Dept. (which oversees the jail system and properly ought to be exercising authority over these services). By 2001, the last official functions of SDCJM were assumed by the Sheriff's Dept. and the Townsends assumed the responsibilities of either re-purposing the organization or dissolving it. With the remaining active members of SDCJM, it was decided to close it down and dissolve it. Years of various prior officers failing to make state-required filings came to the surface, creating a bureaucratically impossible situation. The sole solution became for SDCJM to become a part of MATTHEW 25:34-40 Ministries; this, in turn, became a foundation of jail ministry solutions across our world.

In 2002, the Bible College graduated its first class, and John conducted the final examinations and first ordinations. The two graduates also each got married and John attended the ceremonies. While in Ukraine, John was reading email correspondence from India from Pastor Wilson, who was pleading for help because of a disastrous fire that had burned down an entire village. The Indian church had responded to rebuild the village and to restore daily life essentials to the villages, but they had no resources left to rebuild their thatch church building. The Townsends decided to provide funding for a brick church which could also serve as an orphanage (a great need in the locality). This new relationship eventually grew into the MATTHEW 25:34-40 Mission India.

In 2003, Church@Work grew to 36 congregations at several facilities in San Diego. Also in 2003, Mission San Diego with Billy Graham organized a crusade at the local stadium. The Townsends volunteer for every aspect of Mission San Diego, working with dozens of congregations across the San Diego region. The many things learned in all these activities were documented and shared with the people in Ukraine and India. Pastor Wilson immediately applied the principles to their local gospel crusades in India with wonderful results and leading to the establishment of new congregations.

By late 2002, Christ Fellowship Church was closed as its founder became too sick to continue. The membership had dwindled, and the costs of facilities did not justify the maintenance of the congregation. Members were counseled about which congregations would best meet their needs, but John also continued teaching a mid-week Bible Study for several members at a local restaurant. Christ Fellowship Church became yet another part of MATTHEW 25:34-40, serving as a core of community outreach ministries and as a covering for formal community discipleship programs. The Townsends settled in at Mission Valley Community Chapel, which supported a large number of missionaries in many countries although their local outreach was confined to the local Jewish population through the San Diego Hebrew Mission. MVCC introduced the Townsends to many different missionaries and missionary sending organizations. This became highly complementary to their prior training and experience. It has resulted in a number of enduring partnerships and helped to develop discipleship materials to benefit us all as well as new techniques to reach people more effectively.

In 2003, Promise Keepers returned to San Diego; the Townsends headed the PK Prayer Ministry locally. Through the many local connections, the MATTHEW 25:34-40 Prayer Network Ministries were birthed. The Townsends were also involved in the National Day of Prayer and Global Day of Prayer initiatives, helping to plan prayer events across the County.

In 2004 and 2005, the Townsends were asked to support the Prayer Ministry of Mighty Men’s Fellowship. In 2004, Decision Magazine featured Church@Work as an example of successful workplace ministries. In 2005, Church@Work had grown so much that a Board of Pastors was appointed from those who had become ordained to assume coordination of this ministry, effectively making it an autonomous subset of MATTHEW 25:34-40. Almost immediately, Church@Work started expanding in North America and migrating overseas. Throughout this process, the members of Church@Work persisted in being primarily engineers and scientists.

MATTHEW 25:34-40 Ministries is continually assessing its ministries, gathering and analyzing practical metrics, and looking for needs which we can address. Tens of thousands of people have joined these Ministries and many dozens of denominations are participating with us. In 2020, John and Susan Townsend noted that should they be taken home, the many leaders and Spirit-led people would perpetuate the infrastructure so the Ministries would continue to grow and prosper on without them. Still, their personal involvement provides them with great joy in serving the LORD Jesus Christ.

The many partner ministries and ministry activities of Church@Work members have led to the development of new ways of serving our neighbor’s needs, especially as each new ministry is shared across the broader Ministry and into each of the countries in which we serve. The sharing of ministry ideas and innovations across our international partners has become the mainstay of the growth of MATTHEW 25:34-40 Ministries today.