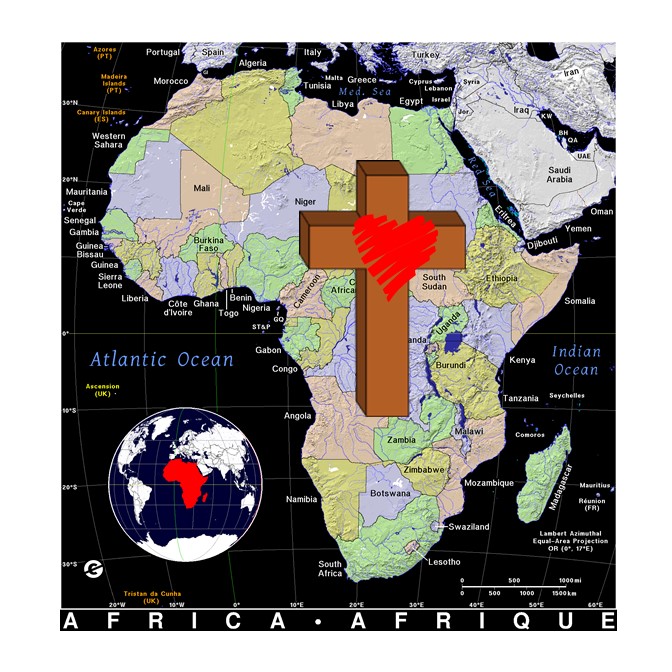 In 2007, a missionary from Rwanda (Rev. Don Schultz) was introduced to the Townsends. He was concerned by an announcement from the Gulf States of an Islamic initiative to make Africa the first all Muslim continent. Don had an idea with which he wanted help to plant churches as a bulwark against the Gulf States initiative.

After several discussions, we decided that the churches should be planted near where new mosques were being built on the outskirts of cities. The mosques are usually established with free schools, which are appealing to parents who cannot afford the boarding schools that are so prevalent in many areas of Africa. Of course, the schools teach an Islamic curriculum, making the students Muslims. Once in, you cannot leave, on threat of death. Our plan was to out do the Muslim approach. Plant free Christian schools together with each church plus also establish facilities (like a business or clinic) also addressing community needs. Don’s plan was to get sponsor-ships for church planters to go to targeted areas in East Africa (primarily Tanzania and Kenya). The church planters would have to be trained and paid sufficiently that they would not lose their family home while they served in the field. Don worked with the Anglican Bishop of Rwanda to detail the identification of church planting teams and how they could be supported. To facilitate raising support funds for the church planting teams, Don established the East African Revival Network. Shortly after this initial planning, John and Don parted company and the Schultz family moved to the East Coast.

Intrigued by the problem and solutions Don and John discussed, John started communicating with contacts MATTHEW 25:34-40 Ministries had in Africa. Another plan emerged which was originally called Vision Africa (but the name was already taken by another viable ministry), so the plan became Vision4Africa. We wanted to not have MATTHEW 25:34-40 Ministries too identified with it because the plan involved recruiting willing partners across the continent wholly dependent on indigenous African resources and without the Ministry leadership involvement.

Within 6-8 months, a communications network was formed involving hundreds of initial churches from 39 denominations to implement The Plan. A Calvary Chapel pastor from South Sudan asked John on a telephone call (in November of 2007):

“Are you coming here?” – “No plans to. I don’t know that I would have anything more to add.”

“How many missionaries are you sending?” – “None.”

“What are you providing?” – “A plan, implementation training materials, a communications network of people who are committing to do it, and technical advice (but only if you need it).”
“What training materials are you providing?” – “The same materials we use to plant churches, raise up leaders, support congregations in other parts of the world, and a supporting prayer network.”

“What training are you providing to counter the false doctrines introduced from North America?” – “A course called ‘Foundations of a (Biblically) Healthy,Well-Balanced Church’ which we use successfully to solve similar problems in North America.”

“What do you hope we will accomplish?” – “For you all to plant 5000 new churches with accompanying free schools, supporting businesses, and free clinics- each capable of replicating themselves within 2 years.”

“Where are we going to get the funds we will need?” – “From you participating partner churches and volunteers. The plan is to minimize the financial costs by maximizing the contributions of volunteers and what our God will surely provide.”

All of the participating churches initially received:

In early 2008, church planters were being identified and trained by their sending churches. Places to plant churches (together with places to lodge) were being identified by participating denominations. The initial target areas were in Northern Nigeria, South Sudan, and Tanzania. Community needs were being assessed to determine what kinds of business opportunities there might be;fresh water projects and brick making projects were the most prevalent. Raising various animals were also considered good ideas. By the end of 2008, over 300 planting teams had been formed and were being commissioned and sent to their mission field. The supporting churches were providing support teams to farm fields, care for businesses and families, and raising funds for field support.In most cases, mobile phones were provided to the ones going out to facilitate communications.

Teams were in the field in 2009, and the communications network facilitated the participating Church leaders to self-organize an overall supervisory leadership. It was soon found that there was a great need for Bibles, and several major denominations took on the responsibilities for getting sufficient quantities.

From the beginning, the plan was to teach using a modified New England Primer syllabus, using it to teach the local languages as well as the national language. Some of the local languages didn’t even have a Bible available or only fractions of a New Testament. Where possible, a di-glot or tri-glot Bible was assembled so the same passages could be taught in parallel in all of the languages of the congregation. It was essential for the people to learn Old Testament principles because they were also needed for the hygiene and business principles they needed to learn. The original plan was for the pastors to teach during the day while the parents were working, but it turned out that in many communities, the whole family came to school to learn to read and write and to learn the Bible principles. Many pastors initially reported holding church, school and all other meetings routinely in a house (hut) or under a tarp strung between trees. The model was to have the people pray together and to find the wise solutions to their problems from the wisdom received from the Lord.

South Sudan became independent in 2008 and almost immediately descended into a civil war. This made it difficult for the new church plants. Miraculously, most of the churches stayed together and even grew during the conflict rather than fleeing to the refugee camps. In one village, they had dug a water well 20 m deep. A military force came through and bulldozed the well; the church people got together and dug it out again, joined by everyone else in the village. Many joined the church in faith to worship Christ. The church grew.

Throughout the initially targeted region, the churches grew, and new leaders were trained. Most of the initial church planters stayed with the Vision to plant more churches and more church planters joined their ranks. All of the new churches started sending out new church planters using the model by which they had been formed; a few of these new churches even sent missionaries to the refugee camps (which were miserable places). Over the next decade, the many small congregations established through the Vision4Africa initiative have held together and grown, planting even more congregations. Over half of the congregations, many still small, planted were planted in South Sudan. The goal of 5000 congregations in 5 years was achieved in November 2013.The church planting initiative has spread to 7 additional nations through 2019.

Today,MATTHEW 25:34-40 Ministries has very little connection with the network continuing the Vision. It is an African Church Vision. However, a number of pastors from the 10 nations in the Vision and from 12 other nations have decided to partner with us and utilize our resources to benefit their ministries.

In early 2020, Pastor John (his adopted name in Christ), sent a message to the Ministries headquarters. He had tried to get something from our website and found it missing (it was off-line for over 6 months due to the server dying). Pastor John said he was the 4th pastor of his church in western South Sudan. His uncle, Pastor Daniel, had been pastor (#3) 'for the prior 8 years and has left for Chad to plant a new church.' The first 2 pastors were the ones who came to plant the church initially and stayed for 2 years, having raised up Daniel. At first, there were only 4 families in the church, but now all 22 families in the village belong. Pastor John simply said, “I have learned so much from the materials Uncle gave to me. I found your email address, and I wanted to say ‘Thank you.’”

In addition to Vision4Africa, MATTHEW 25:34-40 Ministries maintains partnerships with White Fields Missions and Global Training Network plus the many denominational leaders in Africa who have been involved with Vision4Africa at one time or another over the years.

We are encouraged and thankful.

These are various ministers that support this overall mission. Each supporting ministry comes with its own supporting resources and courses.

Community ministries are those services intended to address the needs of an entire community rather than just individuals.

Discipleship Ministries include those that are teaching others why, what, and how to answer the call of Christ and to live like HE wants us to live.

Organizing Churches and Community Services to Work Together

In many places, We are a minority ministry, but in almost every community we are in, we are leaders in organizing activities and recruiting the Body of Christ to serve the needs of the community.

Matthew 25:34-40 describes a series of activities for which the righteous are rewarded because they have done them.